The formation of a society for flatcoat owners in the north of England had long been a dream for Paddy Petch (Rase Flatcoats) but, alas, she died before NEFRA was formed. I am sure she would have been pleased with the result.

Subsequently Lady Crathorne was asked if she would become our patron and everyone was delighted when she agreed. She was a staunch supporter of the association and took a keen interest into it’s activities until she passed away in 2009. 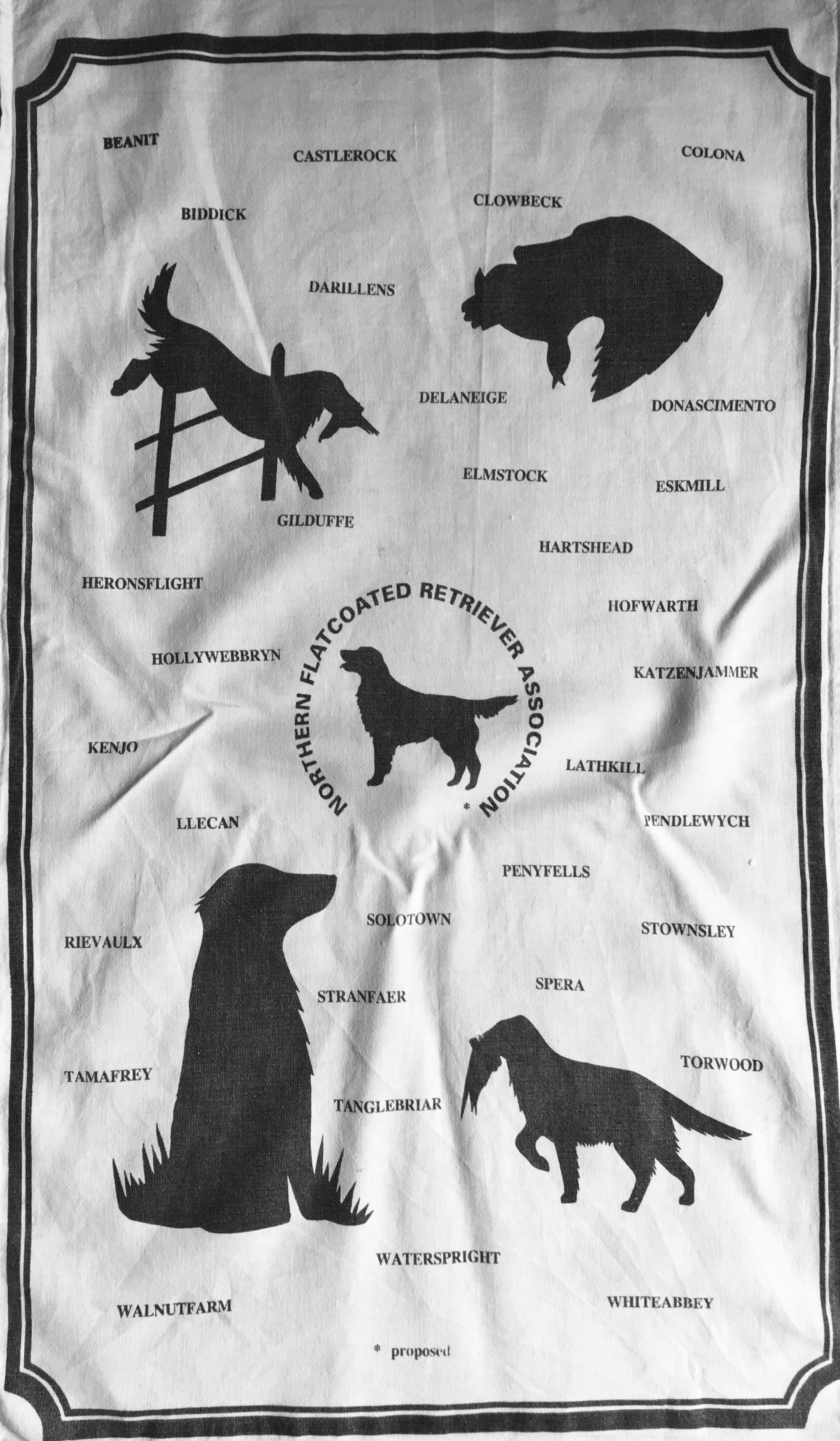 Three names were proposed for the new association, the first choice was the Northern Flatcoated Retriever Association, this was submitted to the Kennel Club who suggested the addition of the word ‘England’. So, with the extra vowel we were able to become NEFRA (incidentally long before the government came up with the acronym DEFRA!)

In April 1995 we held our first training day and during the year we held a fun day too. These events in Cumbria and Yarm, North Yorkshire were well attended by our members

Membership numbers quickly swelled from 200 in June 1994, 329 in April 1995 to over 400 in 1996. Tea towels, pens and stickers were produced with “Northern England Flatcoated Retriever Association (Proposed)” on. The wait to lose that word “proposed” was a bit like house training a puppy. It seemed to go on for ever at the time but looking back it wasn’t all that bad!

The Kennel Club officially approved NEFRA in February 1996 and the following year proved very busy. On February 17th we held a seminar and dinner dance, Sandra Kitching brought along a cake beautifully decorated with flat-coats to celebrate our registration.

Our first AGM was held on 28th April where our constitution was agreed and our subscription rates set. During the year Peter Forster took over the role of chairman and a working sub-committee was formed.

Our first working secretary was Liz Geoghegan who managed the affairs of the association’s working affairs following the first NEFRA working test on 6th October. Our judges for this day were Elaine Whittaker, Sue Rodgers, Bert Stirling and Chris Gwilliam.

The following month we held our first open show on 16th November when our judges were Joan Maude and Pat Appleyard.

In 1996 we sadly lost one of our founder committee members, Karen Roberts, the first of several major blows that have hit the family which NEFRA had become.

The President’s Cup was first presented at our AGM in 1997. This award is given annually to NEFRA member with the highest winning flatcoat at championship shows.

In November 1997 we were invited to hold a stand at Discover Dogs to represent the breed which we were proud to accept.

In 1998 we lost our first secretary, Sandra Kitching, followed by her husband Bob, who had been a leading light in the formation in the Association as well as producing catering to a level that meant many members looked forward to lunch almost as much as the main event!

Sandra’s post was filled by Audrey Forster, Bob’s catering has been replaced by the ladies of the kitchen.

Since those early days our membership grew to around 500, we have held an open show every year (except 2011 & 2014 when we hosted the Joint Flatcoated Retriever Societies’ Championship Show at Stoneleigh).

To try to cater for all of our membership we have also held seminars and many fun days including, in 2000, the millennium fun day where we had a magnificent barbecue followed in the afternoon by scones, jam and real Cornish cream This was of course interspersed with the usual informational and fun doggy activities.

We also had a huge raffle this year and along with sales of calendars managed to raise over £1,000 to donate to one of our selected charities, Dogs for the Disabled, for whom we have sponsored a dog.

This same year we applied for our first Championship Show, which took many years to become reality but is now a firm fixture in the NEFRA calendar. 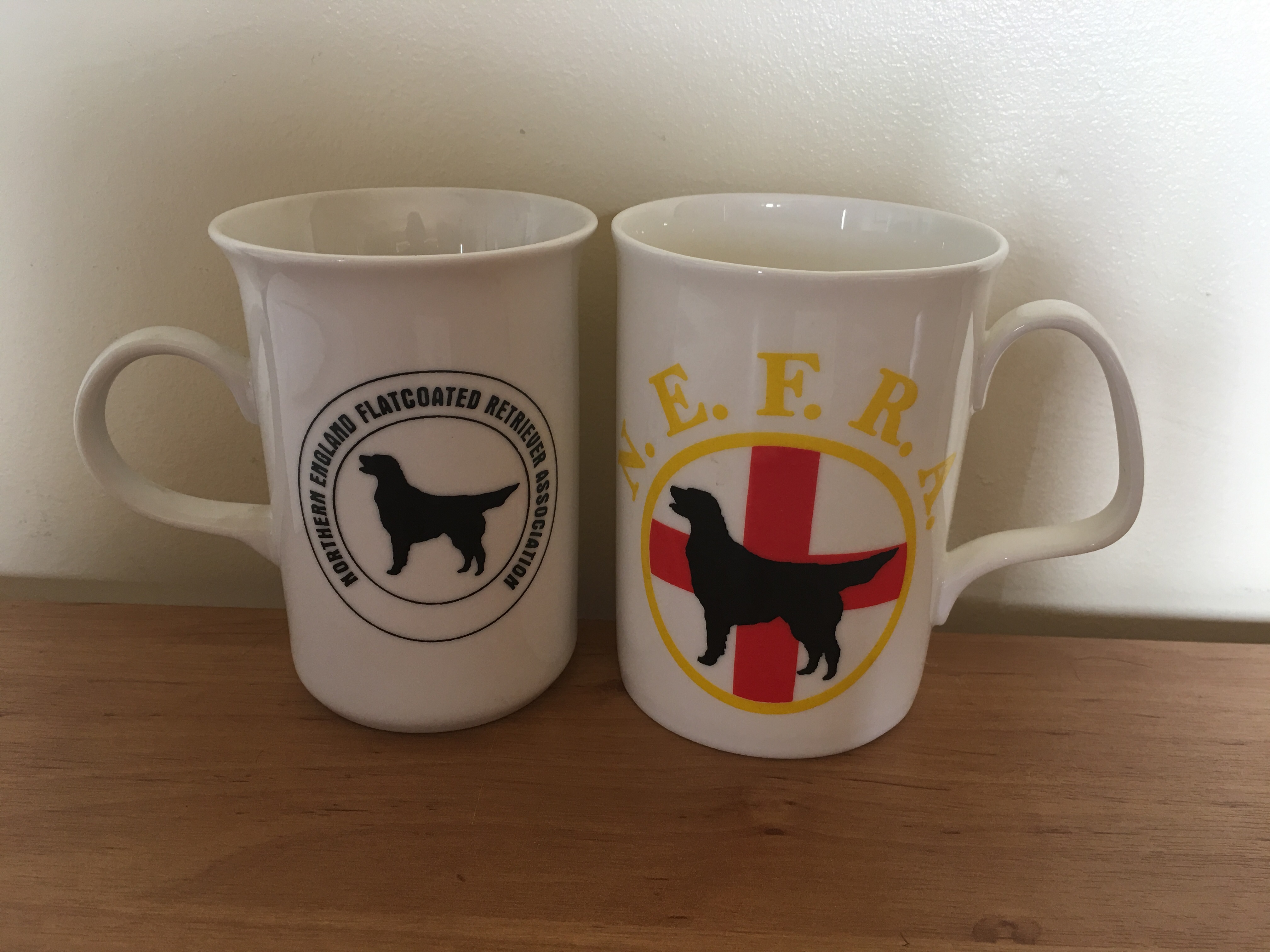 Two of the mugs printed to sell in the NEFRA club shop, the one on the right was to celebrate the millennium

Every year we have tried to hold two working tests, except where foot-and-mouth disease brought everything to a halt in 2001. We have also held cold game tests in advance of the shooting season and have introduced Working Retriever Certificates. Our training classes have become an established part of the NEFRA calendar to help flat-coat owners of all abilities.

In 2004 we lost our first president, George Lancaster, whose experience in all matters relating to the running of the Association was invaluable, particularly in our early years and without which we may have had even more ‘hiccups’. Peter Forster took up the reins as NEFRA President and continued to put his heart and soul into the breed he loved.

In January 2006 we held our first Pup of The Year show which was a great success and was held annually until 2009, the details of which can be seen by following this link.
Later in 2006 the Inca Trophy was awarded for the first time to the flatcoat awarded the most points in agility, working trials, obedience, flyball and heelwork to music.

We began 2007 with our second ‘Pup of the Year’ competition, again well supported. We also held a joint seminar / fun day at the Canine Academy in Tollerton Notts, serious stuff in the morning including a demonstration from a police drugs dog (even though he was a springer spaniel!) there then followed a fantastic meal as per NEFRA tradition with the fun activities in the afternoon, everyone who attended had a great time. We also held our 2 open shows and the usual mix of working & training events organised by Denise Jury our working secretary.

2008 started very positively with the committee really looking forward to finally organising our first championship show at Elsecar Heritage Centre between Barnsley and Sheffield. The May open show at Woodford went well as did our breed specific seminar led by Bob Allen, Rosalie Brady and Ruth Barbour with hands on assessment held again at Tollerton.

Then, in July, the Association received some very sad news: our Show Secretary Mrs Audrey Forster had died – she had been a major force in NEFRA for many, many years and had been particularly determined to achieve championship show status for the associaition, sadly she died just a few months before seeing the dream become a reality.

When November arrived the committee, with Mrs Joyce Ryder (Jaskar) in the role of acting show secretary, organised a show that would have made Audrey proud! Our first judges were Frank Kane & Maureen Scott with Peter Forster as referee. We secured significant sponsorship, all exhibitors received engraved pens as mementoes and class winners some lovely red towels with Flatcoat Silhouettes.

The show was a resounding success with lots of positive feedback from exhibitors, even the pouring rain and the erection of a fair ground on half the car park couldn’t dampen our spirits – NEFRA had definitely arrived!

After such a busy 2008 we expected a slightly quieter 2009, an open show incorporating ‘Pup of the Year’, our second championship show and some working events, how wrong could we have been!
As the AGM approached it became apparent we were going to need to do some major re-structuring of the committee and officer posts. Not only did we need to find a new show secretary to replace Audrey Forster, but Elaine Whiting our Treasurer since NEFRA began was also stepping down, our Chairman and Hon. Secretary (Reg & Sylvia Bunting (Mossdew) were also resigning due to house move to France and we also had committee vacancies to fill. It is at times like these when people pull together and NEFRA was no exception, by the close of the committee meeting following the AGM all posts were filled either by election or co-option.
Karen Joyce (Stranfaer) took over as Chairman, Arnold Ryder as acting Vice Chair, Ian Bott (Maseloch) as Treasurer, Joyce Ryder agreed to continue as acting show secretary for a further year and Les Geoghegan was co-opted as Acting Hon. Secretary, a post his late wife Liz had hoped to fill before her sudden death in the weeks prior to the AGM.

Not only did the committee get a make over in 2009 so did ‘Wagging Tails’ and the Association stationary – we went colour for the first time! During the summer members from the working side of NEFRA were asked to provide stewards for a working test at the CLA Game Fair at Belvoir Castle.

October 2009 saw the death of our patron Lady Crathorne, who had been kind to NEFRA in our early years allowing the use of her estate for various events. With members of her family she would often watch the days proceedings, then join us for a lively discussion over afternoon tea and cakes.

And so to 2010, the AGM saw some of our co-opted officers and committee being elected the their posts and losing ‘acting’ from their titles. We were however short of a Show Secretary and Paula Goulette agreed to step into the breach and with experience as show secretary for another society we snapped her hand off!

Elaine and Gary Whiting and Joyce Ryder left the committee, all worked hard for the association in a number of roles over many years and will be missed.

No sooner was everyone in place than we had to organise our open show at Woodford but with one or two changes, we moved to one judge and Pam Lynott drew an entry worthy of a championship show. We also decided to run some working events alongside the show encouraging exhibitors to realise the true dual purpose nature of their dogs – the scurry was a particular success.

For our third championship show we moved venue to Fenton Manor Sports Complex at Stoke-on-Trent a lighter and brighter venue with easy access from the M6 .

This website uses cookies to improve your experience while you navigate through the website. Out of these, the cookies that are categorized as necessary are stored on your browser as they are essential for the working of basic functionalities of the website. We also use third-party cookies that help us analyze and understand how you use this website. These cookies will be stored in your browser only with your consent. You also have the option to opt-out of these cookies. But opting out of some of these cookies may affect your browsing experience.
Necessary Always Enabled
Necessary cookies are absolutely essential for the website to function properly. This category only includes cookies that ensures basic functionalities and security features of the website. These cookies do not store any personal information.
Non-necessary
Any cookies that may not be particularly necessary for the website to function and is used specifically to collect user personal data via analytics, ads, other embedded contents are termed as non-necessary cookies. It is mandatory to procure user consent prior to running these cookies on your website.
SAVE & ACCEPT