When my flatcoat bitch Inca was a year old she started to suffer from left hindlimb lameness. I first noticed it when she was playing in the garden with the other dogs and she suddenly started screaming.  Her kneecap (patella) had slipped out of its normal position and lay on the inside of her leg. Fortunately I was able to reposition her kneecap promptly but it was still a great shock.

‘Luxation’ means the patella moves away from its normal groove to either the outer (lateral) or inner (medial) edge over the ‘lip’ of the groove. Vets will use different ‘grades’ to describe how easily the patella slips in and out of the groove. The patella may stay luxated and need to be physically manipulated back into position or it may slip in and out freely as the dog moves. In the most severe cases the patella remains firmly fixed out of its normal position. It can arise following severe trauma or, as in Inca’s case, because of an abnormal alignment of the bones and ligaments of the hindlimb.

Inca’s patella luxated medially and did not return to its normal place spontaneously, I had to replace it. To do this I needed to extend the leg behind her and gently move the patella back. I immediately thought surgery might be the only option for Inca and so promptly booked her in to see the orthopaedic surgeon. We chatted about the possible options for Inca and decided to give her a chance to try without surgery at first.

Our next appointment was with the physiotherapist – she showed us how to use an electric muscle stimulator to try to build up the muscle on the outer face of the quadriceps – the theory being that this might persuade the patella to stay in its groove. That weekend I took Inca to the Flatcoated Retriever Society’s championship show with four shaved patches on her leg where the stimulator pads attached – and this prompted discussion with many other flat coat owners about the condition.

Meanwhile Inca also spent two sessions a week in a water treadmill to maintain her fitness. After a very promising improvement in the first few weeks as time went by it became obvious that Inca’s patella was luxating more often and this was risking earlier development of osteoarthritis and giving her less and less confidence in herself. And so the decision was made that in the long term the best option for Inca was surgical correction.

The surgery involved tightening the attachments on the lateral side of the joint and repositioning the prominence of bone on the front of the tibia. This was fixed into its new position by two pins.

In some cases the operation also involves deepening the groove in the femur. But the groove in Inca’s knee was already deep enough – so in order to prevent further damage to the joint the groove was left alone.

Recovery has been steady. Inca stayed in at the orthopaedic surgery for 24 hours after surgery, and came out not weight-bearing at all. She went home with post-operative antibiotics and anti-inflammatories and I received instruction on rehabilitation. I kept Inca on the lead for six weeks – the first 2 weeks just into the garden, when she gradually started to use the leg again. Then slowly increasing the walks to 20 minutes three times a day by the sixth week to allow her stamina to build up again.

As I write Inca has just started her pet obedience classes again and I’ve had her out for one short gundog training session in the field. We are now looking forward to taking her to the local shoot again. 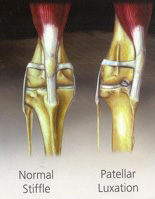 Components that we know influence position of the patella (and affect its likelihood to luxate) are:
• Depth of the trochlear groove of the femur
• Position of the tibial crest (onto which the patellar tendon attaches)
• Muscle balance of the hind limbs
• Alignment of femur in relation to the tibia
• ‘Height’ of the patella

Breed suceptibility to this condition is one of those currently under investigation by the Flat-coated Retriever Society Health sub-committee who invite open discussion of any cases. Contact details are on their website: http://www.flatcoated-retriever-society.org/